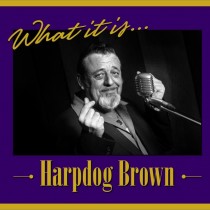 There is never going to be any second-guessing with what you’re going to receive when you place a Harpdog Brown disc onto your player. It’s going to be pure, traditional sounding blues that’s fun, often with a touch of humor. Brown blows harp in the classic Sonny Boy Williamson and Little Walter manner and does it with precision and style. That’s exactly what you get with his latest release, What It Is . . . . This is music that makes you want to move. Makes you want to feel good and have a good time. None of that stereotyped depressing blues played by an old guy sitting on a porch in overalls with a beat-up guitar. That’s not what the blues are really about. And Harpdog Brown is here to show you exactly what it can really mean.

After a few years working in a duet format with piano player Graham Guest, What It Is . . . steps back to Brown’s original traditional bluesy playing that pays a lot of homage to the sensational blues acts that held court in Chicago during the 1950s-60s. And even though he originally hails from Edmonton, now living in Vancouver, you’d think this award-winning Canadian bluesman was born, raised and cut his teeth along Maxwell Street. Brown even throws in few of the Windy City masters’ tracks into the mix with Little Walter’s “Blue Lights,” Howlin’ Wolf’s “All Night Boogie” and Sonny Boy II’s “In My Younger Days” to let you know he can put it there with the best. Also covered is a nice jumping rendition of Wynonie Harris’ “Git to Gittin’ Baby.” But for the most part, Brown’s sharp songwriting is the focus on this disc. His hand was involved in penning nine of the fourteen tracks, with several co-written by drummer John R. Hunter.

Recorded live at Oakstone Studios in Victoria, British Columbia in January 2014, Brown hooks back up with long-time friend, guitarist Jordan Edwards and a rhythm section that includes the aforementioned John Hunter on drums and bassman George Fenn. This is a solid line-up that can easily make a song burn, sizzle and even swing when the direction calls for it. And they do just that on a number of outstanding songs, including “Facebook Woman,” the story of his girlfriend who is always online speaking to strange men and seeking new friends,yet he never sees her face in his own; the snappy step behind “How Come” with Edwards laying down a nice West Coast groove on a guitar solo, something he applies again nicely on “No Money In The Till”; and “Headin’ Out” runs a “Smokestack Lightnin’” groove as a nod to Howlin’ Wolf. The singing and harp work, both diatonic and chromatic, are over the top on all tracks.

What It Is . . . is certainly an album to pick up if you’re looking for that authentic traditional blues sound. Harpdog Brown has captured the sound and feel superbly. And he definitely proves that the blues is fun music, despite those old stereotypes.