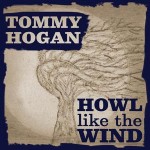 As outstanding as Tommy Hogan’s debut recording was, this sophomore release, Howl Like The Wind, raises the bar a few feet higher. Listening to Hogan’s guitar playing you can tell that he is well versed in the music of those legendary artists who inspired him. There are sharp glimpses of Freddie and Albert King and a heavy dose of John Lee Hooker, and he takes us from Texas to the West Coast, but all the while he lays it out in his own voice.

Alongside Tommy Hogan’s exceptional guitar work, vocals and harmonica playing, he is joined by a more than formidable rhythm section of Scott Van Dusen on drums and Rob Shoemaker on bass. This disc is almost completely original numbers written by Hogan, with the lone exceptions being Freddie King’s “Big Legged Woman” and Stevie Ray Vaughan’s “Lenny.” And despite that latter piece being a tune that is very much overdone by many musicians today, when it is played by the right guitarist it can come across with sensitivity and be quite inspiring. Tommy Hogan is such a guitarist here.

The album opens with a rousing Texas boogie in the title track, “Howl Like The Wind.” So propulsive with its steady rolling beat it’d make John Lee Hooker smile with pride, something Hogan returns to later in the disc on “Quite As Fine As Mine.” Throughout the recording he visits a number of different approaches. On “Cookie Dough” he uses a rolling paced guitar with catchy phrasing, throwing in a harmonica break midway through. “Juke Joint Jumpin’” has a bit of Louis Prima’s “Jump, Jive and Wail” feel, but I also hear a lot of a Kansas City jump blues in the mix, with the guitar riffs taking up where the Kansas City use of horn players would be in effect. It works to perfection. And there may even be a little West Coast spice to the track as well, with hints of Junior Watson or Charlie Baty guitar runs. On “I’m Gonna Love You, Baby” Hogan is almost channeling Albert King’s spirit on his strings. It is a slow blues where his smooth voice sets the mood every bit as much as the guitar. On “Sunshine Inside My Mind” the band steps into a jazzy number that allows the listener to realize that Hogan’s knowledge expands beyond the blues. And the disc closes with a Delta-flavored acoustic piece called “Town To Town.” It is a softer flowing song with Hogan making the promise that he will keep on playing these blues from town to town.

Howl Like The Wind is an exceptional release featuring superb musicianship and clever songwriting. Tommy Hogan may utilize the sounds of the elder blues players who first brought him to love the music, but be assured this is original and fresh material from an artist that is surely going places. And the first place he should go is having Howl Like The Wind dropped into your player. Destined to be on many short lists of the top ten albums from the Pacific Northwest this year!

Howl Like The Wind / Cookie Dough / Juke Joint Jumpin’ / Big Legged Woman / I’m Gonna Love You, Baby / Lenny / Everything You Need / Quite As Fine As Mine / Sunshine Inside My Mind / Town To Town