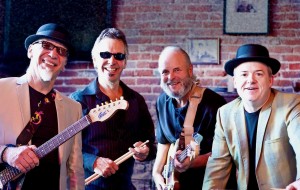 In The Pocket is a blues band in the true sense of the word “BAND!” Based in the Medford and Ashland area, they are striving for collective excellence with their music. This soulful band is creating a unique, sometimes “swampy,” niche in the world of blues and they will be making their Portland debut at Duff’s Garage on Thursday, January 9th with a 9:00 pm showtime.

In The Pocket features J. “Billy Rock” Smith and Leonard Griffie writing original music that lyrically speaks from the heart – often with a touch of life’s dark humor. With Leonard out front on guitar & lead vocals, Pat McDougall on multiple keyboards, Mark Cunningham on “stay just behind the beat” bass, and Billy Rock locked in on drums and lead vocals, this stellar musical quartet creates a powerful expression of blues… Want It, Need It, Got To Have It!

The band has been selected as the representatives for the Ashland Blues Society at the upcoming International Blues Challenge in Memphis, so this is actually a fundraising event for In The Pocket to help them raise the necessary expenses to travel to Tennessee for the competition. It is also a celebration of the release of guitarist Leonard Griffie’s new CD titled Give It To Me. There is a suggested $10.00 donation for this show. Duff’s Garage is located at 1635 SE 7th.  Come out and help the band. Let’s make sure that Oregon and the Northwest are well represented at the IBC!