You are here: Home1 / CD Review2 / The California Honeydrops 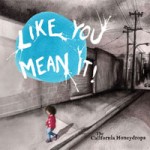 Since their initial release, the Blues Music Award nominated Soul Tub, and despite line-up changes since, The California Honeydrops continue to grow as one of the West Coast’s leading party-enhancing outfits. Their style of blues incorporates soulful and funky rhythms, making it quite easy to shake your booty, too. In fact, they seem more like a displaced New Orleans band with their Mardi Gras second line approach to much of their material. Perhaps it’s the grooving horn lines on trumpet and sax intermixed with some tasty keyboards that does that trick. But it is all in the name of a good time, which The California Honeydrops bring in abundance.

Like You Mean It is the band’s fourth release and I love the way the record opens up with that lonesome whistle working its way into the happy go lucky number “Here Comes Love.” The track is a classic example of pure California Honeydrops, with second line beats, trumpet and vocal harmonization. As band leader Lech Wierzynski sings about finding the right kind of sugar with his new found love, you know it is of the sweetest kind.

Wierzynski is a multi-talented performer, the perfect front person for the band. Along with his fabulous singing and trumpet playing, he also strums some very nice guitar and is a heck of a songwriter. The band is made up of all around sensational musicians: Ben Malament laying down that funky downbeat on drums, Johnny Bones blowing monstrous sax, Charles Hickox laying down the groove on keys and Lorenzo Loera delivering the heartbeat soul of the music on bass. And they all provide some amazing vocal harmonies.

This is happy to be alive music. Their approach to just about all of their selections is meant to leave you feeling good. How can you not smile when you’re told that it’s going to be a zip-a-dee-do-dah day in “Like This, Like.” Lech tells you about how he cannot get his sweet “Carolina Peach” out of his mind and wonders if she still thinks about him. It is a funny feeling when you have everything you need, but it is a lonesome feeling when you do not have the one thing that you really want. On a track like “In Your Power” the band officially shows off their ability to sound like they’re from the Louisiana backwoods, offering a perfect zydeco piece or New Orleans R&B number driven by sultry sax and accordion. The title number, “Like You Mean It” offers memories of great soul music from the 1970s. Heartbreak comes in the theme of “Just Another Day,” as Wierzynski lets loose on some of the finest soaring vocals on the album backed by incredible organ, as he realizes waking up crying and seeing your face everywhere he goes that it’s going to be another day going through pain without you. The disc closes on a slow blues piece again highlighted by Wierzynski’s voice, “Baby Boy Blues.” Here he offers that he has seen his share of fast women and that they almost caused him to lose his mind. The mood of the piece is enhanced by great organ work, snare drum and saxophone.

The California Honeydrops have released another fine album that is sure to have you snapping your fingers and dancing in no time. If you cannot see them live, their releases will keep you happy in the meantime. Like You Mean It is another step forward in the evolution of the band that is destined to become the party band of the generation. Those who have witnessed this superb outfit know that it’s coming. Jump on board and enjoy the ride.

Here Comes Love / Like This, Like That / Carolina Peach / All Day, All Night / Like You Mean It / Just Another Day / Just Because / Prayer (Interlude) / Other Shore / In Your Power / Got The Feeling / Bedside Window / Baby Boy’s Blues