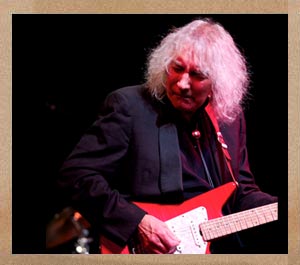 Originally from England, guitar master Albert Lee has worked with a who’s who of the best musicians in a variety of genres. He was first influenced by the sounds of British skiffle artist Lonnie Donegan and Americans like Buddy Holly and Gene Vincent, and later the sounds of Jimi Hendrix and Eric Clapton. Lee has worked with Chris Farlowe, Joe Cocker, Eric Clapton, The Everly Brothers, Roseanne Cash and Bill Wyman’s Rhythm Kings amongst many others and at 70 years of age he shows no signs of letting up his work anytime soon. Country musician Vince Gill calls Lee: “One of the finest guitar players who ever walked this earth…”

Opening the night will be Portland’s very own guitar hero Terry Robb. Considered one of the very best guitarists on the West Coast, Terry Robb has won numerous Cascade Blues Association Muddy Awards and recently released his current CD Muddyvishnu. Always a spell-binding guitarist on stage.

Blues for MS III Concert at the Aladdin March 3