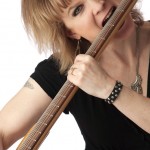 It’s ladies blues night at The Lehrer on Friday, May 1 as Lisa Mann & Her Really Good Band and Polly O’Keary & The Rhythm Method will team up for a sensational night as two of the hottest Northwest bands come together for one event. Both Lisa and Polly are two of the most highly awarded musicians in the region with multiple honors from several blues societies.

Polly O’Keary & The Rhythm Method will open the night. Bass player Polly O’Keary has been named the Best Female Vocalist and Songwriter by the Washington Blues Society and aside from leading her own band has also worked with Too Slim & The Taildraggers and The Randy Oxford Band. She is joined by Clint “Seattle Slim” Nonnemaker on guitar and Tommy Cook on drums, two of the fines players in the Puget Sound area. Touring in support of their latest release Compass, this band is always a fiery and entertaining act.

Following Polly O’Keary will be Portland favorites Lisa Mann & Her Really Good Band. Lisa Mann has been on a steady roll this past year since the release of her album Move On, winning three Muddy Awards, the Blues Blast Magazine Sean Costello Rising Star Award, feature stories in various publications, performing throughout the United States and Europe, a featured act at the massive Blue Bender Festiva in Las Vegas and has been nominated for a Blues Music Award for her bass playing. Lisa Mann is one of the must see performers in the Portland area.

This amazing double bill happens at The Lehrer, 8775 SW Canyon Lane, at 8:00 pm. Admission is $10.00. This is a Cascade Blues Association co-sponsored event, so show your current membership card at the door and receive a $1.00 discount.