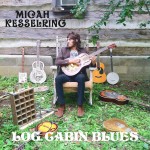 Micah Kesselring started playing guitar when he was nine years old and decided that the blues was his music of choice at fourteen. Now at the ripe old age of twenty, he has firmly ensconced himself into the Ohio blues scene, and has made an impression on many across the  country with his performances. Kesselring has competed in the International Blues Challenge three times and made the semi-finals with each appearance. He will be returning once again in 2014. Other highlights of his young career have seen him share the stage with Otis Taylor at the 2009 Blues Music Awards and Keb’ Mo’ at Columbus’ Project Blues Review, touring Florida with the Sean Carney Band, performing as a featured youth act at Tacoma, Washington’s Gray Skies Blues Festival and as a repeat artist at the Centrum Blues Festival & Workshops.

Recently Kesselring has released his debut album, Log Cabin Blues. Recorded in his own home studio, he plays every instrument on the disc and penned seven of the ten tracks offered. As an acoustic artist, he finds himself influenced by many of the legendary figures of Piedmont and Delta blues, as well as many modern day players like Alvin Youngbood-Hart, Mary Flower, Phil Wiggins and Rich Del Grosso. The blues offers him an outlet to play music that is heartfelt and can cover any emotion he may be feeling. Unlike other young musicians who may play blues music at a young age that are drawn away as they age, Kesselring has found his niche and should be an artist that will carry on the tradition set forth by those elder influences.

Selections on Log Cabin Blues are all outstanding. Be they the covers of Charlie Patton like “Pony Blues,” Howlin’ Wolf on “Forty-Four” or Son House’s “Preachin’ The  Blues,” he places his own flavoring into each, making these well-covered numbers have new life. He is an accomplished songwriter already as displayed on tracks like the opening “Damned Soul Blues” or “Riverbend Blues.” He is also quite adept at multiple instruments and Americana readings. His song “Kit’s Tune” stems from the Appalachian music of his background in Southern Ohio and his work on the banjo on this track fits the region’s sound to a tee. “Mean Uptown Mama” has the Piedmont feel of John Cephas and the closing track “CGGB” is a blistering slide performance on cigar-box guitar. The title track “Log Cabin Blues” is reminiscent of songs like Robert Johnson’s “Red Hot” or Lil Johnson “Peanut Man.” Quite impressive with its good time feel and masterful playing.

Micah Kesselring is still young in years, but his musicianship belies a player many times older. This is an artist that should grasp the next generation of blues players and if that is in fact the case they’re in capable hands.