Driven By A Sound
Checkerboard Records 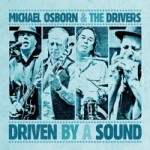 When it comes to traditional blues in Portland, you certainly cannot go wrong with Michael Osborn & The Drivers. Four heavy-duty musicians who have been laying down that bluesy groove together for several years locally and individually or with other groups for a lifetime. Led by guitarist Michael Osborn, who spent 13 years playing with John Lee Hooker and touring the world, as well as releasing a trio of solo recordings before moving to Portland, with string work that is spot on for blues stylings with tone and knowledge of when and how much to play effectively. Joining Osborn is bassist and vocalist Ken “K.G.” Jackson, an award winning band leader in Portland himself; harmonica monster Dave Mathis who has burned the reeds with locals such as Kelly Joe Phelps, Steve Cameron and Sheila Wilcoxson and also knows a thing or two about singing himself; and drummer extraordinaire John Moore who has worked with the likes of Bill Rhoades in Portland, as well as Albert Collins and William Clarke nationally. The four combine as if they’ve worked together their entire lives, sounding as close to being brothers as you can get. You’ll always know exactly what you’re in for at any Michael Osborn & The Drivers’ performance, straight ahead blues and nothing but the blues.

It has been more than four years since the band released their initial album, The Glamorous Life, in 2010, so hearing new material on disc by these guys is always highly anticipated. With that in mind, I’m jumping up and down with excitement over the band’s new entry to their catalog, the five-song EP titled Driven By A Sound. Five new original numbers that continues that bluesy sound that drives us all to this band. Four tracks are written by Michael Osborn and the fifth, “Retirement Blues” is a Dave Mathis number.

Driven By A Sound opens with a searing guitar line that is punctuated by harmonica and a full horn section as Osborn, Jackson and Mathis trade vocals and harmonize together on “When I Listen To The Blues.” The horns are sharp, tight and really bring an attraction that draws you into the music from the get go. Osborn’s guitar playing is terrific and tasteful, especially on the solo, working to perfection alongside the horns and the regular band. The horns were arranged masterfully by trumpet player Joe McCarthy and include Portland greats Brad Ulrich and Chris Mercer (who has played with practically the definitive who’s who in the music business world wide) on sax.

Dave Mathis displays his brilliance on the tin biscuit on his own composition “Retirement Blues” as he explains “growing old isn’t easy, it’s so hard to adjust, one day you’re working steady, the next you’re collecting dust.” “Live Wire” is an instrumental focusing wholly on the stringing of Osborn with a walking pattern rhythm section. Both stinging and ultra-pleasing, this is dynamic blues guitar at its best. “I’ve Been Daydreamin’” takes us to those thoughts of wishing for a better life and wondering if it’ll be our time to get ahead. The band takes a Bo Diddley approach to close the disc with “Through With You.” John Moore’s drums carries this number with a harp solo offered by Mathis, who also leads the vocals. Not to be outdone, Osborn carries the track with another sensational guitar solo.

Driven By A Sound is exactly the type of recording you would expect from Michael Osborn & The Drivers. It is blues done just right. The only drawback is it leaves you wanting to hear more. Five songs is just getting my appetite wet. Hope that there is more coming down the road soon. But in the meantime, yes, yes, yes, this is some mighty fine guitar blues, absolutely driven by a sound. And a fine one at that.