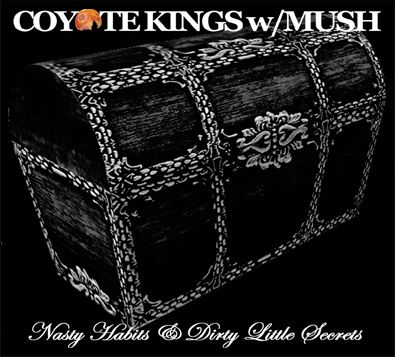 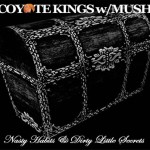 When it comes to rockin’ blues bands in Eastern Washington, The Coyote Kings are definitely within the cream of the elite. This hard-hitting trio led by Robin Barrett on sizzling guitars and Chris “Rocket” Johnson pounding the skins and Kit Kuhlmann’s pulsating bass lines add deliberation to the music scene in Walla Walla and all points beyond. When you slip in the addition of the amazing vocals of Michelle “Mush” Morgan you’ve got a recipe to turn a lot of heads taking note of this strong, tight band. Mush joined the band in 2010 and was prominently featured on their last CD, Move. This time out on the latest release Nasty Habits & Dirty Little Secrets, she captures the full soul and intensity of Robin Barrett’s lyrics, taking the band to unforeseen acclaim.

All the tracks on Nasty Habits are penned by Barrett. They are well crafted, telling stories of life’s lessons in the pains of romance and warnings thereof as well. Barrett is at his best writing the slow, grinding blues where his guitar work fills in the emotion with the singer’s voice, whether his own or Mush’s, partnering with the instrumentation driving the impact home.

Take a song like “Best You Couldn’t Do.” Mush is telling you that you’d better listen up to what she has to say about how things are between you and her. She is cold and blunt. A kiss is not foreplay. And though you did the best that you could do, it’s just not enough on your part. The lyrics are emphasized by Barrett’s stinging guitar lines.

That is followed by Barrett taking on the vocals for “Hard To Be A Man.” It is another number of love gone wrong. It’s tough to be a man with somebody like you who spends so much time lying, cheating and all those other things you do.

And yet the theme continues with another strong track featuring Mush with “Baby’s Gone.” The interplay between vocals and guitar shines once again, with Barrett’s string-work on the slow blues jarring at your heart with the emotive pain that is being expressed.

With “That Hot Daddy” the band picks up the pace. It is a fun and nasty little number where Mush is telling us to pay heed to some of those men you ladies may encounter, cause some of those hot daddys are really sharks, swimming around like a mako in the dark. Love the imagery that Barrett has created here.

“Afternoon Sun” offers a relaxed, easy going number deep with one’s feelings for their partner, where I can’t think of anything I’d rather do, than take a little rest with you. And the instrumental “Walking In The Fog” is sensational, with Barrett channeling the spirit of the late Gary Moore’s guitar style to perfection. The disc closes out with “Am I Gettin’ Wise,” where Barrett takes a little look at himself in the mirror and despite still feeling like he possesses some of his younger wild ways, he has found recovering from too much partying takes a bit more to recuperate from and temptations are becoming easier to avoid with age.

Nasty Habits & Dirty Little Secrets is a very nicely produced recording with over the top sound. The band is clearly finding their niche and it’s in a place that is quite enjoyable and welcome in the ever strong blues world of the Pacific Northwest. Watch out Walla Walla, with the Coyote Kings & Mush putting out such a masterfully crafted album like this one, your little backyard secret will most likely get out and spread like wild fire on radio stations and stages far beyond the Northwest. This album has all the goods to cause just that.