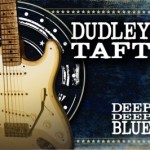 Former Seattle-based guitarist, now living on the East coast, Dudley Taft has securely placed himself into the upper class of the blues rock pantheon. A previous grunge rock artist who started with the band Sweetwater, he has waded into the bluesy depths of the Mississippi River for its musical culture. I just never realized that it flowed into Puget Sound.

Deep Deep Blue is Taft’s sophomore release and it is definitely for fans who enjoy the likes of ZZ Top or Joe Bonamassa. Taft catches us with nasty guitar hooks and exceptional songwriting. He covers a broad range of musical journeys that even includes performing the works of Bob Dylan and Lou Reed; making their music his own fiery property when said and done. His take on “Palace Of The King” makes you wonder if Leon Russell and Don Nix originally meant the tune to be for him foreseeing the future some forty years in advance. It is every bit as exciting as Albert King’s version, and that is saying a lot.

His original numbers, eight of the eleven tracks on the disc, find noteworthy lyrics and musical interpretation, highlighting his stellar guitar with formidable backing by John Kessler on bass, Eric Robert on keys and a trio of first-class drummers, Scott Vogel, Jason Patterson and the sensational Chris Leighton.

Taft has extended the blues rock boundaries, giving it his own sense of punch and delivery that can be hard-hitting and crafty. Dylan’s “Meet Me In The Morning” catches your ear right off and setting the pace for the electric forces emanating throughout the disc. But then he can hit with a mellower number like “Wishing Well” that reminds me of some of Tim “Too Slim” Langford’s material, meshing both acoustic and electric guitars. This in my opinion is by far the best number of the album..

You may find bits that sound like the best of classical rock here, but it is all drenched heavily with a blues base. If you like blues with a bit of a bite and edge, Dudley Taft is somebody to place close heed, too. Sharp and solid licks like those on Deep Deep Blue will sink deep and grab you by the shoulders, shaking you to give them a listen. Do so! Dudley Taft has that rock edge that’ll hold on to you long after this one finishes playing. He has found his true niche. Going back to the music that originally inspired him and it is where he belongs.