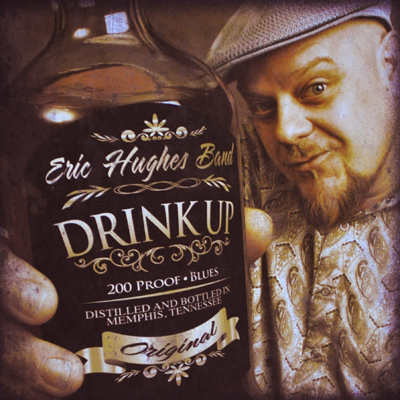 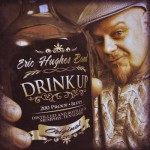 Drink Up!
I-55 Productions

Chances are if you’ve ever spent any time on Beale Street looking for the blues, you’ve come across the Eric Hughes Band. Long time mainstays on Beale, you can usually find them in one of several venues throughout the week. His popularity amongst the performers has earned him perennial nominations as the Beale Street Entertainer of the Year. A master on guitar, harmonica and vocals, he is also a crafty wordsmith when it comes to songwriting.

Drink Up! is the fourth release from the Eric Hughes Band. It features a strong line-up of musicians alongside Eric: Leo Goff on bass, Walter Hughes on guitar and mandolin, Doug McMinn throwing down drums, percussion and congas, Chris Stephenson on keys, and Memphis legend Robert Nighthawk Tooms also on keys. The production staff is also of high note, with Brad Webb as engineer, co-producer and mixer, and Dawn Hopkins, perhaps the finest editor and mixing professional in the entire MidSouth if not the entire country.

What is truly enjoyable about Eric Hughes’ music is his ability to come at you from a multitude of directions. He opens up with the title track, “Drink Up!” done in a jumping rockabilly feel. Later on he takes a little funk flavor with tracks like “Frostina” and “Repo Man.” “That’s My Baby’s Mama,” with its pop song quality carries a memorable catch-phrase behind a Stax-like guitar groove that if you do not watch out, you’ll be singing in your head endlessly. The cover of “Going To Brownsville” opens with a very traditional Delta feel, played on a steel-bodied acoustic guitar, with the pace picking up midway through as the band joins in. And “The Ballad Of Weevil Point Willie” is a nice display of Hughes’ songwriting ability to pass on a story; this time with a little down-home setting enhanced by the mandolin work of Walter Hughes.

Eric Hughes runs fully in front of his band each and every time out. His harp work on “Blues Magician” captures the essence of his bluesy lyrics precisely, doubly enriched by tight guitar licks. And what songwriting: “I’m a blues man, I’m only happy when I’m down.” On “Frostina” he uses great imagery to describe the coldness of this woman: “combs her hair with an icicle,” “sleeps in a Fridgadaire” and “just too chilly to hold.” Now that’s cold! And visual. He tells us about the life of a bluesman , staying out all night, cigarettes and booze, now you’ve “Tested Positive For The Blues.” His doctor tells him he needs to get a little sunlight, but the only cure that there really is is to find a little loving. This song is Eric Hughes at his unique best!

Drink Up! is a terrific recording, falling quite rightfully in the Memphis mode. It is a blues album, but it has been crisscrossed by other forms of music, too. Much like Beale Street and the city itself. Eric Hughes has struck gold in his songwriting this time out and the musicianship of the band and himself are definitely reaching new heights as well. If you’re unfamiliar with Eric Hughes or the modern Memphis blues sound, do yourself a favor and pick up a copy of this one.