The NW Film Center presents their 32nd annual Reel Music Festival, and as usual they have included a little blues music as a treat. This year’s event will be held at The Whitsell Auditorium at the Portland Art Museum from October 10th through the 22nd. 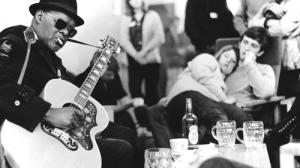 On Saturday, October 18th, at 7:00 pm, be sure to catch “Harlem Street Singer: The Guitar Gospel Of Reverend Gary Davis.” One of the truly great American ragtime, blues and gospel musicians, Reverend Gary Davis’ (1896-1972) unique style and virtuoso skill on the guitar made him an icon during the 1960s folk revival and inspired a generation of musicians. “Harlem Street Singer” celebrates the beauty and spirituality of his North Carolina–bred music as well as the human qualities that made Davis a much beloved teacher and minister. Featuring great performances and interviews with musicians he influenced and taught, including Bob Weir of the Grateful Dead, Jorma Kaukonen of Jefferson Airplane, David Bromberg and Woody Mann. (78 mins.) 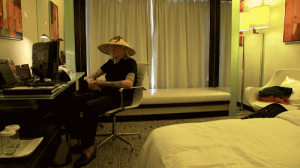 Winter to France, Japan and beyond to create this intimate, aptly named portrait of the Texas musician as famed for his sex, drugs and rock & roll lifestyle as his blazing blues guitar. Winter’s recent passing at age 70 recalls not only a storied life—Woodstock, partying with the Rolling Stones and John Belushi, dating Janis Joplin, and jamming with Jimi Hendrix— but fantastic playing and the respect of legends like Muddy Waters, who said: “When I first heard him, I thought he was one of the greatest blues players in the business.” (94 mins.)

Each show requires a separate admission. General admission prices are $9.00, $8.00 for Portland Art Museum members, students and seniors. Advance tickets are available at www.nwfilm.org or may be purchased at the door one-half hour before screen time. Visit the website to also find out about all the other great films being presented at this year’s festival.

Rick Estrin & The NightcatsStill Water Vibes Combines Traditional and Modern Blues into an Explosion of...
Scroll to top