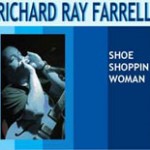 There are a number of musicians that have spent a lifetime playing their blues that seem to be overlooked by the mass market. Alas, that is the life of a musician after all. Not everybody is recognized for their contributions and it is the luck of the draw when somebody does break out on the big time. To me, Richard Ray Farrell is one that is sorely under recognized. With an armful of recordings that have garnered substantial critical acclaim and working alongside many highly renowned players, he just seems to be that one step from becoming one of those artists everybody knows and loves.

Based nowadays between Pennsylvania and Spain, Farrell spent a good many years busking the streets of Europe. He gained a bit of notoriety on that side of the Atlantic, working with a Spanish gypsy band and being a choice touring member of acts like Big Jack Johnson, Lazy Lester, RL Burnside, Louisiana Red and Frank Frost when those artists crossed the ocean. He also paired up with former Mothers of Invention drummer Jimmy Carl Black leading their own band. It does not matter what approach he takes in the blues, he continuously releases stellar material, whether it is a rocking direction as with Spanish guitar great Raimundo Amador on the album Camino de Sanlucar, or teaming with harp players like Steve Guyger or Marco Pandolfi. Acoustic, electric, slide guitar, harmonica, Farrell can handle them all and is an exceptional vocalist and songwriter as well.

His last recording, I Sing The Body Electric, found a good deal of airplay on radio stations across the United States and Europe. It was a nice mix of various blues feelings in both acoustic and electric formats. His latest, Shoe Shoppin’ Woman, also follows that direction and is yet another outstanding release.

The disc opens with the title track, telling the humorous tale of a man whose lady is a collector of shoes who goes overboard, having to have the right shoes for every occasion even if worn only once. She’s got more shoes than sense Farrell exclaims. And he doesn’t have the money to keep up with her habit.

There is a lot to enjoy on Shoe Shoppin’ Woman. Great guitar and harmonica interplay on “Just Like Sonny Liston.” A slow, burning blues on “Johnnie’s In Jail” with Farrell sizzling out guitar lines. The tale of long distance romances that just never work as he sings about being “Stuck In Philly” while his girl’s in Tennessee. Great instrumentals again showcasing his guitar playing on “Road Trippin’” and “Shake It!” and on “She’s My Girl” he just has to shout about her he is so happy and so much in love.

I have to note the great selections of the three cover tracks he includes on the album. The guitar phrasing on “Blue Shadows Falling” is piercing and tasteful. He tears it up on slide on Elmore James’ “Wild About You Baby.” But for me, it is the inclusion of Snooks Eaglin’s “If I Could” that really makes this a special album. Those Imperial years for Eaglin produced some of his best work, but sadly not too much of it is covered these days. Farrell is spot on with the song’s delivery, capturing that easy going New Orleans R&B feel that Eaglin mastered at that time.

Richard Ray Farrell has created yet another outstanding album with Shoe Shoppin’ Woman. If you have never given his music a listen before, pick it up. You just may be compelled to explore more of this superb bluesman.

Shoe Shoppin’ Woman / Stuck In Philly / Just Like Sonny Liston / Blue Shadows Falling / Road Trippin’ / If I Could / Wild About You Baby / Johnnie’s In Jail / Shake It! / Stir Crazy / She’s My Girl