“Every generation has its chosen one and right now, this is Clark’s time” – Entertainment Weekly 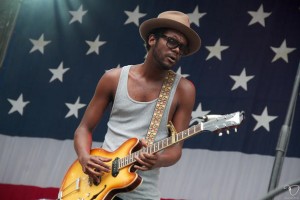 Based out of Austin, Gary Clark Jr. is continuing the long line of Texas guitar greats. His playing has been compared to Jimi Hendrix and Stevie Ray Vaughan. It is a powerful and inspired mix of blues roots with contemporary soul and hip-hop, and when he’s rolling at his best, he sounds like nothing so much as a natural hybrid of both the past and the future of the blues. He has appeared in the film Honeydripper and also has played in Eric Clapton’s Crossroads concerts. Clark has released four albums and is currently touring to promote his most recent, Blak  and Blu.

Gary Clark Jr. will be performing at The Roseland Theater (8 NW Sixth Ave.) on Friday, October 4th for an 8:30 pm show. Tickets are available through www.ticketswest.com and are $27.50 for general admission on the floor and $39.50 for reserved seating in the balcony.