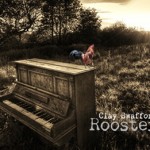 Clay Swafford is like a throw-back to days of yore. This 30-year-old red-headed youngster can lay down piano playing as if he were a direct descendant of Otis Spann, Jimmy Yancey, Roosevelt Sykes, Pinetop Perkins and Memphis Slim all rolled into one. And in many ways, he just may be. Swafford has the knowledge of the blues and it comes rolling across the keys every time he steps to a piano. For somebody who has been gaining notoriety for a number of years, working on stage alongside artists like Bob Margolin, Hubert Sumlin, Paul Oscher and Willie “Big Eyes” Smith, it is hard to believe that he is just now releasing his first recording. And this presentation is the full package real deal you’d expect.

Wanting to draw from personal influences as well as throwing in some of his own original tracks, Swafford worked behind an old Weber upright piano in the studio. Song selections that he covered were written by Bog Joe Turner, Big Mama Thornton, Little Walter, Floyd Dixon, Jimmy Rogers, Muddy Waters and Elmore James. Simply an instrumentalist himself, Diunna Greenleaf was brought in to provide her voice. The pairing between Swafford and Greenleaf works like a charm. You feel like you’re sitting in a piano bar with Greenleaf just nestled up next to the piano, a huge smile on her face, as Swafford runs his fingers over those ivories.

Of the original numbers, Swafford pays tributes to a few of his heroes. “Messin’ Around Davenport” takes on Ray Charles’ classic “Mess Around” and adds a little bit of a Cow Cow Davenport riff to make it unique. “Big Joe’s Stomp” acknowledges the Cincinnati boogie master Big Joe Duskin, a tremendous artist who recorded so little due to a promise to his father not to play the blues while he lived (his father lived well into his 90s). Just paying heed to an artist like Duskin proves Swafford’s merit as a blues historian as well as a performer. On “Rooster’s Boogie” there are examples of the sounds of St. Louis and Kansas City, while on “Olympia Strut” you can hear the blend of Chicago alongside New Orleans.

The album closes out with a trio of songs, all recorded in settings featuring other musicians. The first pair was recorded at Hopson Plantation in Mississippi with Bob Margolin playing guitar on Muddy Waters’ “Mean Disposition” and Elmore James’ “Fine Little Mama.” The closing number is from a performance at The Rhythm Room in Phoenix with the Rhythm room All Stars, Bob Corritore on harmonica, Chris James and Johnny Rap on guitars, Patrick Rynn on bass, Brian Fahey on drums and Big Pete Pearson belting out the words to “Tin Pan Alley.” These last tracks show how well Swafford works alongside other musicians while the remainder of the album showcases his solo piano work. This is a brilliant debut from a musician that we’ve no doubt only heard the first from. More than exceptionally talented, this kid has the true goods to be a blues hero.