Sammy Eubanks is one of those special vocalists that only come around once in a blue moon. So smooth that he has been nicknamed “The Voice” and has received nine vocalist of the year awards from the Inland Empire and Washington Blues Societies, meriting Hall of Fame status with both. Sammy reached the semi-finals at the 2013 International Blues Challenge in Memphis. 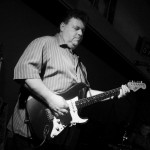 When you think of it, artists like BB King, Robert Cray, Little Ed and Blues Imperials, Philip Walker, Kenny Neal and anyone that plays the Blues has been honing their craft their entire lives. At the other end of the spectrum artists like George Jones, George Strait, Marty Stuart, Merle Haggard, Lee Roy Parnell and anyone who has ever banged it out in a Honky Tonk have been honing their craft as well. Sammy can stand on either stage and has many times. It was recently stated,” Along the borderline between Country and Blues some genius arises. Delbert McClinton and Sammy Eubanks have the same borderline genre.”

Though living in Northern Idaho, Sammy Eubanks does not make it to the Portland area very often. But when he does, it is always an event to behold. With drummer Michael Hays and bassist Dave Nordstrom, this trio can put out a lot of sound and recently signed with Spokane’s Mission Control Records. Sammy Eubanks will be back in the area on Saturday, January 17th at The Lehrer, 8775 SW Canyon Lane, for an 8:00 pm show. Opening set by the Bottleneck Blues Band. Admission is $10.00. Definitely a not to miss show

Thorbjorn Risager & The Black Tornado Has This Been The Year Of Lisa Mann?
Scroll to top