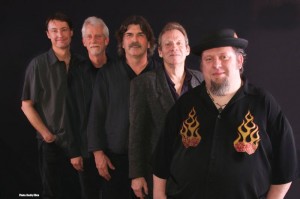 Hank Shreve has been honored six times by the Cascade Blues Association with Muddy Awards, including two in 2013 for Regional Blues Band and Harmonica Player (his second recognition in the latter). Having picked up the harmonica at the age of eight, Hank has proven himself one of the leading players of the instrument on the West Coast, and it is not too uncommon to see him step behind a keyboard or a set of drums as well. Based out of Eugene, his band took home Muddy Awards the past couple years for Best New Act in 2012 and Regional Act in 2013. They’re a powerhouse live band that features original blues to keep a crowd on their feet as featured on the band’s debut recording I’ve Had It which also received a Muddy Award nomination for Northwest Recoding of the Year.

The Hank Shreve Band does not make it up river to Portland too often, so when they do you know that it will be a party on hand. The band will be returning to Duff’s Garage, 1635 SE 7th, on Saturday, January 4th for a 9:00 pm show. This is a Cascade Blues Association co-sponsored event, so bring your current membership card and receive a $1.00 discount on the $10.00 admission at the door.