You are here: Home1 / Paul Biondi

END_OF_DOCUMENT_TOKEN_TO_BE_REPLACED 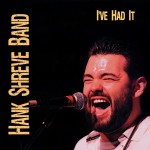 I’ve Had It
Boogie Boss Records

I’ve Had It is the debut release by the Hank Shreve Band, winners of the Cascade Blues Association’s Muddy Award for Best New Band in 2012. It is exactly what you were hoping for. Fast paced rhythms being driven by a terrific band with Hank front and center on voice, keys and razor-sharp harmonica. There is jumping blues and some mighty fine soulful tunes throughout a very nicely produced recording.

Hank Shreve was influenced immensely on the Mississippi saxophone by the likes of Paul deLay and Norton Buffalo and those impressions are quite noticeable in his performances. He has mastered that authentic deLay sound that is not the easiest approach on harmonica and there are not many who can master it as well as Hank. He also proves himself exceptionally well on keyboards and drums. The band is very tight, featuring his father Bill Shreve on bass, vocals and offering some tasteful songwriting of his own. Stan Welsh on guitar and Skip Jones fill out the band and there are also guest appearances by drummer Tim Donahue and Eugene’s legendary saxophonist Paul Biondi.

Song selections are mostly originals that most people who have followed Hank’s career starting with the Ty Curtis Band and then into his own solo foray will instantly recognize from his live performances. Numbers like his own composition’s “Boogie Boss” and “Real Kinda Thing,” along with covers of Roy Brown’s “Lollipop Mama” and K.C. Douglas’ “Mercury Blues” have long been staples in his set-lists. Newer tracks like the rock-blues of the title track “I’ve Had It” with its fine keyboard and guitar work and the New Orleans street parade-like “Street Light” are definitely shining pieces to the band’s repertoire. Stan Welsh’s guitar work really shines on the slower blues “Lover’s Holiday,” a piece co-written by Bill Shreve, who penned three of the songs on the album. I’ve Had It closes out with a Welsh-written instrumental shuffle “Sugar Bee Boogie” that highlights everybody in the band; a great way to close out this exceptional collection of music.

I’ve Had It may be a debut release, but it comes across as if this band were old hats in the studio with one another. Clearly one of the finest recordings to originate from the Northwest yet this year. Expect to find it on many best of lists at year’s end. Definitely a winning release from a band that is set to bring us all to attention very quickly.