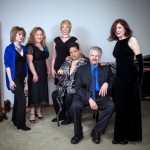 musicians of the past sixty years. The recipient of four Grammy Awards, seventeen Blues Music Awards, induction into the Rock & Roll, Blues and Rockabilly Hall of Fames, she is best known for a long string of hits including songs like “Tell Mama,” “I’d Rather Go Blind,” “At Last,” “Something’s Got A Hold On Me,” and “Damn Your Eyes.”

When Etta James passed in 2012, a special tribute concert was held in Portland featuring a handful of the finest women vocalists in the city, backed by an all star band led by pianist DK Stewart. That performance led to a sensational live recording released on CD and several more performances that have become highly popular and regularly sell-out.

On Sunday, June 14, there’s another opportunity to catch this amazing show. Five fantastic vocalists: Duffy Bishop, Lisa Mann, LaRhonda Steele, Lady Kat and Rae Gordon, will be joined by The DK Stewart Sextet featuring guest guitarist Chris Carlson for one show only at the Alberta Rose Theatre, 3000 NE Alberta Street. Show time is 8:00 pm and tickets are $18.00 advance general admission, $22.00 at the door. Limited preferred seating is available for up front and center for $30.00. This is a Cascade Blues Association co-sponsored event and you can receive a $2.00 discount when ordering tickets online at ticketbiscuit.com and using the promotional code “CBA.”