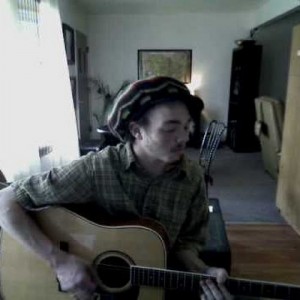 As everybody knows, the Safeway Waterfront Blues Festival is the biggest blues event of the year in Portland happening annually over the 4th of July weekend. So every year I am asked when the Cascade Blues Association’s general membership meeting will occur? Here is my rule of thumb. If the festival is a five day event, meaning it runs during the first Wednesday in July, then we move the meeting to the second Wednesday. If it starts on a Thursday, then the meeting is held that first week. We do so to offer an opportunity to those coming into Portland for the Waterfront to get a taste of the organization and a little more focus on some of the wonderful performers who reside in our area. And I routinely try to schedule a strong line-up for this meeting. This month is no exception.
Opening the meeting will be one of the strongest young acoustic players in Portland, Tevis Hodge, Jr. Tevis recently won the right to be a finalist in the Cascade Blues Association’s Journey To Memphis competition to vie for the honor of representing the region at the International Blues Challenge in Memphis, TN next January. Make sure to catch his Journey to Memphis set at the Waterfront on the 4th.
Tevis is dedicated to preserving the American traditions of blues, ragtime, jazz, and folk music. Born in Virginia, Tevis was exposed to blues music at an early age. Due to his African-American heritage, and his love for the music, he is compelled to continue the traditions of his people. He has been playing music for 18 years and has played the blues for more than 10 years. Tevis is inspired to keep true to the traditions and techniques of the musicians of yesterday for an authentic experience, while at the same time accenting his own original flare and interpretations, placing himself among the many original blues musicians of the past 80 years. His songwriting coincides with the stylings of the original roots music, which keeps an authentic flow from song to song, whether his own material, or an old traditional tune. This is where he shines as an artist, being more than a re-creator of the sounds of the past, he is a contributor to the new in the vein of yesterday. An outstanding and exciting live performer, Tevis Hodge, Jr. is on the verge of breaking out as one of the finest artists in the city. You do not want to miss this set! 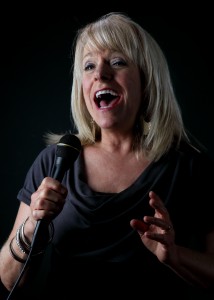 For the second set of the night we will be bringing back one of Oregon’s favorite blues bands, the Joanne Broh Band. They played last for us as part of our annual Sweetheart’s Dance in February, they are making a return visit which is sure to keep the dance floor jumping. Hailing from the Eugene area, Joanne is an award winning vocalist with the Rainy Day Blues Society and a past finalist for the CBA in the Journey To Memphis as well as being a musical mentor for the United By Music’s North American program. She will be accompanied by her strong band that features guitarist & vocalist Jerry Zybach who has toured extensively as a solo artist and with the late Honeyboy Edwards, bassist Jim Badalich and Dan E. Miller on drums & vocals.
Joanne Broh is a column of energy, known for her powerful, soulful voice and the passion of her performance. She is considered one of the region’s finest singers of blues, jazz, and Motown soul. This is upbeat blues with a little rock for spice and a splash of funk and this band is always guaranteed to liven up any and every stage they take.
Please join us for an exciting night of terrific blues at the CBA general membership meeting. And do not forget to pick up a free drawing ticket at the door for your chance to win prizes like CDs and concert tickets. We will also have another great multi-CD package that you can win for only a $1.00 a chance ticket. We hope to see our local friends and perhaps some visitors from out of town. Always one of the best times for blues each and every month.

Ramblings On My Mind Journey To Memphis Finals To Be Held At Waterfront Blues Festival On July 4...
Scroll to top