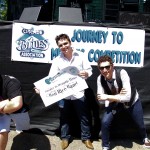 Four acts won the right to take part in the Journey To Memphis finals at the Trails End Saloon in early June, The Mojo Blasters, Tevis Hodge Jr., Lisa Mann & Her Really Good Band and the Ben Rice Band. The finals were held on July 4th on The Oregonian Front Porch Stage at the Safeway Waterfront Blues Festival before a huge crowd with all four acts presenting dynamic performances. And when it was all said and done, the judges voted for the Ben Rice Band to represent the Cascade Blues Association in Memphis next January at the International Blues Challenge.

This year’s event was unique. Tevis Hodge Jr. had already won the right to go to Memphis prior to the Waterfront as he was the only solo/duo act that had advanced to the finals. He was competing against the bands for the grand prize money. All three of the bands or members of each had previously been to Memphis to represent the CBA at the IBC, so they knew what they needed to do to advance.

Judges for the finals were all seeing each of the acts for the first time, so they brought fresh ears and open minds to the competition. The judges were John M. Rink, a musician locally who has a 55-year career playing drums extensively in Boston, New York, Cape Cod and Connecticut with acts like James Montgomery, Danny Kalb and currently The Rhythm Dogs; Laura Lund, a past vice president of the Sacramento Blues Society who helps promote and support local musicians in the Northern California area; and Pat Pepin, a musician from Maine who has competed in the IBC numerous times and helped The Blues Foundation by volunteering for the event and the Blues Music Awards, tours nationally appearing on stages alongside people like Mike Zito, Debbie Davies, Zac Harman and Eddie Shaw. Big thanks to all three of these judges for offering their time to us.

Thanks also goes out to former CBA board members Mary Maxson and Sandy Forst for acting as time keeper and judges’ assistant respectively, and to the stage crew and sound people on the Front Porch Stage.