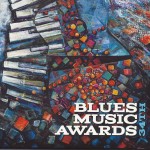 For me, I always look forward to the release every year of the Blues Music Awards DVD, made even nicer the past couple years as it also includes a CD that allows you to take the music with you in your car. Since I have been working the stage for the past few years, the DVD allows me to see some of the show I might’ve missed as I am being kept busy backstage. It also gives a sense of pride knowing that I had a part in making this great event..

The Blues Music Awards are considered the elite honors for artists in the blues genre. Since most award shows tend to overlook the blues, it is recognition from those people who love the music itself and support the artists as they tour and release new recordings. The DVD portion of these releases are meant to be seen by the public and are offered for presentation on Public Broadcasting Television. It includes highlights of performances and acceptance speeches. There are a handful of performances on the DVD that are extras and the CD offers most of the same tunes uninterrupted by speeches and in their entirety.

The artists who perform each year at the Blues Music Awards are all nominees and winners. Selections on the DVD/CD this year include the night’s biggest winner with three awards including the BB King Entertainer of the Year Curtis Salgado performing his nominated song “She Didn’t Cut Me Loose.” Janiva Magness also sings her winning song “I Won’t Cry.” Other vocal highlights are John Nemeth on “Said Too Much” backed by The Bo-Keys and a sensational take by Dorothy Moore on her timeless classic “Misty Blue.” Other acts included are Rick Estrin & The Nightcats, Heritage Blues Orchestra, Victor Wainwright, The Mannish Boys with Sugaray Rayford (and for Portland fans, Kevin Selfe, Franck Goldwasser and Jimi Bott), Joe Louis Walker, Mud Morganfield, Eric Bibb, Diunna Greenleaf with Bob Margolin, Royal Southern Brotherhood, Shakura S’Aida, Harrison Kennedy, Paul Rishell & Annie Raines, Nick Moss, and Milton Hopkins & Jewel Brown.

The crowning event of the year in the blues world. If you cannot make it to the Blues Music Awards, this is a great way to be a part of the show whenever the feeling comes upon you. Check it out and you just may find yourself making reservations to attend next time.