You are here: Home1 / CD Review2 / Roomful Of Blues 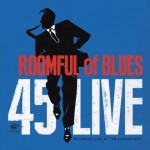 Roomful of Blues, in honor of their 45th year as a band, celebrate by releasing 45 Live. Recorded over a three night engagement this past March at The Ocean Mist in Mantunuck, Rhode Island. Forty-five years; this is a band that just never seems to slip on by. And that is certainly great news for blues fans because this group continues to release amazing, jumping music that can set the mood for any dance party.

Vocalist Phil Pemberton holds down the lead with the band, easily gliding through song selections from throughout their lengthy tenure as a band. There may have been numerous musicians that have gone on to stellar heights upon leaving Roomful of Blues, but they somehow manage to come right back with other artists that fill the void and push the bar even higher yet. Guitarist Chris Vachon delivers smoking hot guitar in these performances, captured exceptionally on the cover of Magic Sam’s “Easy Baby.” And without saying, the horns are over the top great. But they have always been the heart and soul of Roomful of Blues to begin with, as Mark Earley on sax, Doug Wolverton on trumpet and original member Rick Lataille on sax and clarinet blow strong and true.

The band touches all blues oriented stylings, such as the deep blues of Chicago with the aforementioned “Easy Baby,” Louisiana with “Jambalaya” and “Crawdad Hole,” jazz with their tribute to Illinois Jacquet on “Straight Jacquet,” or that true Kansas City big band feel with Pemberton playing the blues shouter fronting in the style of Big Joe Turner, Walter Brown or Jimmy Rushing. Lots of Roomful of Blues favorites offered here as well, touching on rarely played numbers like “Dressed Up To Get Messed Up” to more recent cuts like “Turn It On, Turn It Up.”

Forty-five years; that must make them like The Rolling Stones of the blues world. But though they may have gone through about 50 band members throughout the years, Roomful of Blues have been quite consistent in presenting music in their same format, performing constantly, and they’re aging much better in looks than The Stones, too. Here’s hoping that this band keeps pushing that big blues band sound for several more decades. Great live retrospective of a super band.

Just Keep On Rockin’ / It All Went Down The Drain / Jambalaya / Easy Baby / That’s Right! / Crawdad Hole / You Don’t Know / Dressed Up To Get Messed Up / Straight Jacquet / I Left My Baby / Blue, Blue World / Somebody’s Got To Go / Turn It On, Turn It Up / Flip-Flap-Jack