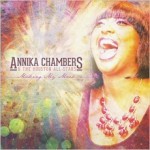 I first became aware of Annika Chambers during the Blues Music Awards weekend in Memphis this past May. This powerhouse vocalist was part of the Beale Street Mess Around showcase, performing with Jeff Jensen and Brandon Santini. She has an extremely strong voice that instantly draws you into her soulful R&B and bluesy material. And she has that knack to bring whatever direction she approaches come across just right, whatever it may be, good old plain funky danceable numbers or tear-inducing emotional songs.

Making My Mark is Chambers’ debut recording with the award-winning team of Larry Fulcher of the Phantom Blues Band behind the helm as arranger and producer, while engineered by Houston’s ace studio man Richard Cagle at the latter’s Montrose Records. And speaking of award-winning contributors, they have gathered a sensational band of some of Houston’s elite players, many who have garnered Grammy Award wins and nominations with a good portion of them being members of Taj Mahal’s bands. The name Houston All Stars is definitely befitting of this group.

There are seven original numbers on the album. Larry Fulcher’s daughter Dominque offers her songwriting skills to three numbers (as well as a little rapping on “That Feel Good”), and Chambers herself wrote or contributed on three of the tracks. Outstanding covers range from BB King (“Let’s Get Down To Business”), Bobby Charles (“Jealous Kind”), Steve Cropper & Eddie Floyd (“Love’s Sweet Sensation”), Faye Adams (“It Hurts Me To My Heart”) and even The Crusaders (“Put It Where You Want It”).

The opening song “Move” is something of an autobiographical piece set to a funky pace with nice wah-wah guitar from Brad Absher. It is her story of how music made her make the move in life to pursue her dreams. She had spent the previous eight years in the Army achieving the rank of sergeant and doing two tours in Iraq, but performing in a talent show helped her discover her true passion and music has been her focus since.

There are a couple obvious double-entendre numbers “Lick ‘Er” informing her bar-hopping partner that she has something that Jack ain’t got, and “Barnyard Blues” where all the animals on the farm seem to be getting a little frisky and the city boy who learns more down on the farm than he did on the streets.

There truly is a lot to be excited about on Making My Mark. Annika Chambers is a rising star in our midst. Check out this disc and remember that name. I have a feeling we’re going to be hearing it on a regular basis in the years to come.