Early last year, following the passing of the great Etta James, a tribute show was held at the Alberta Rose Theatre featuring five of the city’s finest female vocalists: Amy Keys, Duffy Bishop, LaRhonda Steele, Lisa Mann and Rae Gordon backed by the DK Stewart Sextet and Friends. That event was recorded and highlights of it have been released as a CD titled Tell Mama.

To celebrate the CD’s release, a new show has been put together which will take place at the Alberta Rose Theatre on Friday, March 15th at 8:00 pm. Returning will be the DK Stewart Sextet along with singers Amy Keys, Duffy Bishop, LaRhonda Steele, Rae Gordon and added for this event Lady Kat.

Tickets are available through www.albertarosetheatre.com and are $15.00 in advance. This is a CBA co-sponsored event and members can receive a $2.00 discount when ordering on-line by using the code CBA. Minors are okay when accompanied by a parent or guardian. The Alberta Rose Theatre is located at 3000 NE Alberta St., Portland.

Do not miss out on what is certainly going to be yet another night of incredible music in tribute to the late Etta James.

It seems like a long time since Franco Paletta & The Stingers last released Can’t Kick Love. But the wait is more than worth the time. I Like It Just Like That is a brilliant follow-up to that disc and surpasses it immensely. Utilizing the band that he won the Cascade Blues Association’s Journey To Memphis competition and took with him to Memphis for the International Blues Challenge, this is an ensemble that fires on the right track in every direction. The camaraderie between each member enhances one another, all masterful at their respective instruments. This is by far the finest collection of musicians Franco has ever worked with. And Franco himself has never sounded better on vocals and his harp work is dynamic.

Recorded at Droolin’ Dog Records and produced by Dave Alvey, Franco Paletta and Timmer Blakely, the album is filled with catchy tracks that take on a variety of blues directions. Opening with a strong harmonica and guitar pairing on “Oh Baby” the band kicks off in fine fashion, propelled by the added horns Joe McCarthy, Scott Franklin and Jeff Homan. Jason Thomas’ guitar bites with intensity, as he does throughout the album. Steve Kerin steps to the front on the third track with delicious keyboard work. He also pounds the ivories to perfection on numbers like “I Really Want To Sing The Blues” and “Red Hot Lovers.” The rhythm of Timmer Blakely on bass and Jonathan Barber on drums is rock solid, holding the whole band together flawlessly.

Personal highlights on this album filled with great numbers has to be the R&B feel of “It Brings A Tear,” sounding as if it could’ve been lifted from a soul recording from forty-fifty years ago. The Jason Thomas penned “Livin’ The Blues Again” showcases Thomas at his slow blues guitar best; quite moody in a walking the back streets in tears type moment that can raise the hair on the back of your neck. That is followed up with another great guitar number with “Gypsy Woman.” Franco’s churning harp on the title track is joyful and plays to effect the sense of his adoration for his life’s love. And of course there is “She’s My Little Girl,” a number that has become somewhat a trademark song of the band that just gets you into the mood to dance every time it’s played.

Franco Paletta’s songwriting continues to jump leaps and bounds. His voice is growing richer with flavor and emotion, which is only made more developed with those clever lyrics he is offering. I Like It Just Like That is the finest recording The Stingers have given to us yet; and if the progression of this band keeps growing the way it is, watch out for whatever they do next. 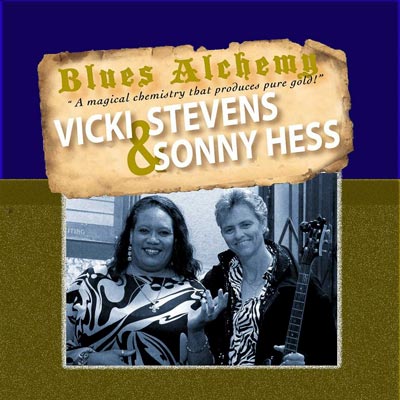 Four of the six selections are well-known covers. But in the vocal chords of Vicki, “29 Ways,” “Built For Comfort” and “Groove Me” really takes flight. A couple of Sonny’s original songs have appeared previously on her All Aces CD, but they are a nice mix to showcase the new act as well. I particularly enjoy the new version of “Lie Myself” with Vicki taking the vocal lead. It sounds incredible and even more haunting, with Kevin LaBaron handing out exceptional saxophone and Sonny’s intense guitar work is one of her best outings ever. Add to that the popping bass of Jim Hively and Kelly Pierce’s driving drums, it is the perfect ensemble of this band at work.

A fine release that makes you want to hear more of this grouping. Cannot wait to see what they do next.

Been There Done That
Delmark Records

Been There Done That is a sensational recording by bluesman Linsey Alexander who has worked the clubs of Chicago since moving there from Mississippi in the 1950s. It is his debut on the Delmark label, though he has released a number of solo efforts on smaller labels that probably did not get the attention out of the Windy City that this masterful artist truly deserves. Alexander is not about flash. He is not a guitarist that is going to strike out as many notes as he can in little time. This is tasty blues done right, being played by a well-toned band that completely shines on each and every track, including some well-known Chicago artists such as guitarist Mike Wheeler, keyboardist Roosevelt Purifoy and on three selections harmonica ace Billy Branch. There is also a lot of emphasis provided to the music by the LA Horns.

The music is straight forward and filled with emotion and often a little tongue-in-cheek humor. Alexander works to perfection the collaboration between his voice and the band. He throws in dashes of soul and funk with the blues, but regardless it all comes across as Chicago blues as you’ve come to know and love.

All but one of the dozen tracks had Alexander’s hand as part of the songwriting. The lone exception being Willie Kent’s number “Looks Like It’s Going To Rain,” a true highlight on the album as he pays tribute to his good friend who passed away in 2006, with The LA Horns bringing the song to life alongside Alexander’s guitar. Other tracks of note have to include “Big Woman” where he playfully sings about his over-sized girl-friend who he has to take to Lake Michigan to give her a bath and because he couldn’t buy a Cadillac she would fit into, had to buy a bus instead. But he still loves her as she “smells like butter, but tastes like cream.” Billy Branch and Roosevelt Purifoy are superb alongside Alexander’s guitar on the opening “Bad Man.” The three of them blend nicely without ever stepping on one another. The soulfulness of “Been There Done That” has a flavor that makes it sit right beside some of the very best songs of Little Milton or Johnnie Taylor. But to be honest, I cannot find a single track on this disc I do not enjoy.

Been There Done That is without doubt an album that brings out the very best of the blues. A guitarist and vocalist of top shelf form who has put in more than half a century developing his craft that absolutely excels. Double thumbs up to Delmark for bringing yet another over the top Chicago musician to the forefront. Highly recommended!

Tell Me Why: His Best 15 Songs
Wolf Records

Vance Kelly is a seasoned Chicago-based blues artist who plays some very fine guitar and has a distinctly soulful voice. Having worked around the Windy City for the past few decades, including a stint in A.C. Reed’s band, he has developed a strong fan base and has released a handful of recordings on the German Wolf label, known for showcasing often overlooked Chicago blues artists.

His latest recording with his unit The Backstreet Blues Band, Tell Me Why, is subtitled as His Best 15 Songs which notes audience favorites from his career and offers cover gems from artists such as Z.Z. Hill, Bobby Bland, Junior Parker, Sir Mack Rice and others compiled from his previous Wolf releases. There are also four newly recorded numbers including takes of Prince’s “Purple Rain” and Billy Roberts’ “Hey Joe” (best known for the cover by Jimi Hendrix). Both of these tracks truly allow Kelly to stretch out on his guitar. He can work it with a number of notes, but really draws out the emotional emphasis in everything he plays. And Kelly does not just perform covers of other musicians’ music; he’s also a capable and gifted songwriter, penning several original tracks on this outing.

The Backstreet Blues Band currently is made up of keyboardist John Walls, Mark Miller on bass and Shawn Lewis throwing down multiple instruments including drums, guitar and harmonica. But over the years, and displayed on several tracks here, Kelly has employed some monster Chicago musicians such as Big James Montgomery on trombone, guitarist John Primer, sax master Eddie Shaw and harp ace Billy Branch, among others.

This is a fine collection for anybody looking for an introduction to Vance Kelly and his soulful Chicago blues.

It is with extreme heavy heart that the CBA notes the passing of two important members of our blues family, Ardis Hedrick and Dick Pawlack. Both played pivotal roles within our organization in their own ways and we will be eternally grateful for both.

Ardis Hedrick was one of the prime shakers and movers of the early Cascade Blues Association years. A board member including a period as Vice President and editor of the BluesNotes. Ardis created the newspaper format that the BluesNotes still uses today. Many of those early issues were crafted by Ardis and her team in her home’s basement, using the detailed and tedious manner of pasting each issue together by hand. It was also her idea to sell advertising in the BluesNotes to help make it a self-sustaining project. A lifelong music lover, she also served many years with Positively Entertainment & Dining as a contributing writer bringing to attention many of our local musicians and their CDs.

Dick Pawlack was a supporting member of the Cascade Blues Association for a number of years. He had a passion for the blues and could be found in attendance endlessly at numerous shows and events. Aside from being a supporting member, Dick was also a benefactor to the organization, donating many items for raffles, silent auctions and giveaways, including his own hand-blown glass pieces and the ever-popular oversized harmonicas that he had signed by musicians. Before he passed, Dick made a contribution through the CBA to the Memphis-based The Blues Foundation, sending them a personally-made quilt pieced together from festival t-shirts and another one of his large harmonicas that may be destined a place in The Blues Foundation’s Blues Hall of Fame. A celebration of life for Dick will be held at Duff’s Garage on Tuesday, March 12th.