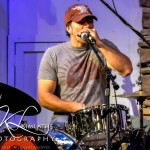 If Mark Twain had envisioned a twenty-first century roots musician, he might have created a character like Randy McAllister. With his easy-going persona and wry, observant wit, McAllister’s music calls to mind that of Doug Sahm, John Hiatt, and Delbert McClinton, with a blues man’s background and sensibilities thrown into the mix. McAllister weaves material in the singer/songwriter tradition, with nods to a variety of styles. He is one of those rare artists who is able to meld genres such as gospel, blues, country, Tex-Mex, rock, and zydeco together and come away with something that is uniquely him. In performance, his songs combine an uncontainable energy and intensity with lyrics that dig into the tough topics. From urban violence, homelessness and other harsh realities to more common concerns like love and dating, McAllister’s songwriting approach is particularly skillful, able to be both truthful and funny.

McAllister takes universal feelings and translates them into today’s reality, with his own pointed style expressed through his distinctive, soulful voice.

With ten critically praised albums and a 2002 Grammy nomination under his belt, Texas-based harmonica player and songwriter Randy McAllister will be appearing at The Birk, 11139 Hwy 202, Birkenfeld, on Tuesday, March 15 for a 7:00 pm show. Admission is $15.00.