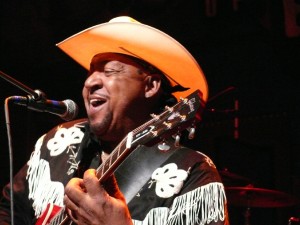 Guitar Lightnin’ Lee, a multi-talented rhythm and blues purist, has defied all rational logic by assembling his band with a bunch of veteran rock and rollers half his age. His talent, lyrics, powerful voice, and boisterous personality match perfectly with the energetic drive of his backing band. Thus creating a supercharged blown out style of New Orleans rock and roll and blues.

Born in New Orleans, Lightnin’ had music all around him. Originally taught by New Orleans bluesman, Boogie Bill Webb, he also mentored under the legendary Jimmy Reed in Chicago, who passed on his style of Delta Blues via electrified Chicago. Back in New Orleans he played with greats like Fats Domino, Earl King, Ernie K-Doe, and Little Freddie King, absorbing everything he heard.

Guitar Lightnin’ Lee will be making a rare trip to Portland for a show at Duff’s Garage on Thursday, December 18th for a 9:00 pm show. Remember to bring your current CBA membership card as this is a Cascade Blues Association co-sponsored event.