You are here: Home1 / Past PDX Blues Event 20132 / Fourth Annual Blues 4MS To Be Held At The Aladdin Theater- March 2nd 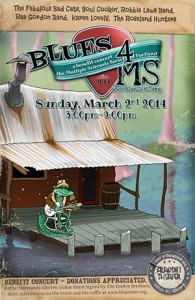 The Multiple Sclerosis Society of Portland’s (MSSP) fourth annual Blues 4MS concert is coming up on Sunday, March 2, 2014 at the Aladdin Theatre.  Great thanks to the Cascade Blues Association for co-sponsoring the event and an even greater thanks to CBA’s President Greg Johnson for putting together a spectacular line up.

The fun starts at 3 pm with The Fabulous Bad Cats. This five-piece outfit offers original and classic rock, funk and blues. These guys have one aim in mind, that’s to get you onto the dance floor and show you a good time.

Soul Cookin’ is an all-star line-up that has been hosting Wednesday nights at Blackwell’s for the past couple of years. Led by Oregon Music Hall of Fame members Lloyd Jones and Carlton Jackson on guitar and drums respectively, alongside bassist Dave Kahl (Paul deLay Band, Fiona Boyes) and keyboard master Louis Pain (Paul deLay Band, King Louie & Sweet Baby James). Expect to hear some funky cool tunes and steamy blues as this group sets the groove.

The Robbie Laws Band is the resident act for Blues For MS, having performed every year at this event. Cascade Blues Association Muddy Award winner twenty-one times over, including nine times for electric guitar player of the year, Robbie Laws is a true icon of the Northwest Blues scene. This performance helps celebrate the band’s latest release, Between the Lines.

The Rae Gordon Band is fresh back from a successful showing at The International Blues Challenge in Memphis, TN, where they advanced to the semi-finals. Rae was also named the recipient of the 2013 Duffy Bishop Female Vocalist of the year at the Muddy Awards and her latest CD Blue Lemonade was named one of the top CDs in the State of Oregon for the year by 1859 magazine.

Since taking second place overall at the International Blues Challenge in 2010, Karen Lovely has been on a steady rise toward the top of the blues world. With three Blues Music Awards nominations, appearances at some of the largest blues festivals and tours throughout the United States, Canada and into Europe, Karen is about to unleash her third CD to a highly anticipating audience. Her shows feature top-shelf musicians and cover not only her own material, but often what she terms as Prohibition Blues, exploring the female artists of the early years of the blues.

And to close the evening, be prepared to party New Orleans style, as one of the city’s most funky bands, The Roseland Hunters, promises to get you out of your seat and setting your backside into motion, Another all-star conglomeration that stretches across genres from Portland’s musical grab-bag of talent, with guitarist Michael Quinby leading the pack on guitar and vocals, alongside the talents of percussionist/drummer/vocalist Brian Foxworth, bassist Damian Erskine, keyboardist Chris Phillips and drummer Reinhardt Melz. This is a dream band that starts a party every time they perform.

A $10 suggested donation is encouraged.  Donations will remain in Oregon to support the local MS community.  MSSP seeks to improve the quality of life for those living with MS, including family members and caregivers.  We help take care of the here and now needs.

This year, we are raffling a fabulous Normandy electric guitar, hand signed by the Doobie Brothers.  Raffle tickets will be sold at $5 each or 6/$25. The winning tickets will be selected following the last set on March 2nd and the lucky ticket holders need not be present to win.

Come prepared to have a great time listening to some of the best blues talent around.  In the meantime, go to www.blues4ms.org or call 503 297-9544 for more information.