Between The Lines
Self Produced 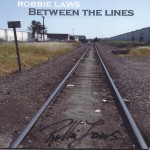 Robbie Laws is a Northwest guitar icon. That may be a little understated, but the fact of the matter is the man can flat out play a guitar like it’s his business . . . and it is. Fans have recognized Laws’ skills, honoring him with nine electric guitar Muddy Awards from the Cascade Blues Association. But there seems to be no limitations to his prowess on six strings and that is highly evident on his latest recording Between The Lines.

For best proof, jump right ahead on the disc to “Coffee Grounds and Eggshells.” In his most Albert King like impression, this instrumental is a burn down the house intense slow blues number. The guitar cries out with feeling that makes you bite your lip with its every punctuation and a tone that is so sweetly rich it could give you diabetes. And yet, this is precisely the type of blues guitar work that those who’ve followed Laws’ career expect of him.

Plus there is no shortage of guitar mastery on this album. He pays homage to a number of avenues of the music world, be it the West Coast swing patterns on “Yazoo Slim Rides Again” that could make even Little Charlie Baty envious, or the jazzy lines a la Laws’ mentor Ronnie Earl that shows up on several tracks, or the easy-rolling Chicago style shuffle on “Jimmy Reed” paying homage to the song’s namesake and his partner Eddie Taylor.

A number of these songs are already familiar Robbie Laws fare as he has been performing them for a few years and they’re just now finding their way to disc. Numbers that served as backbone pieces of his International Blues Challenge sets such as “Gritz ‘n’ Greens” and “Shakin’ What Your Mama Gave Ya” are snappy tunes aimed at bringing the audience to the dance floor. And though he has covered B.B. King’s classic “Sweet Little Angel” in the past, it is the inclusion of Karen Lovely’s vocals that sets the bar for this take above a number of other renditions you may have heard before by many artists. There is just that extra layer of yes sir and uh huh that makes you know this is the way it was meant to be heard. Expressive and emotional, it takes it to that special level.

No matter what angle Laws throws out on the album’s selections, it is all emphasized by the solid rhythm of Benjamin Laing on bass and Randy Herbert on drums. The three can read each other’s next step and it makes the musical flow precisely in line with the way Laws has envisioned the material. Still, it is Robbie Laws’ feel on the guitar that drives Between The Lines. It just may be the finest display of his string diversity and skill yet to date. And it leaves you with the thought, where else can Robbie Laws take us that he has not explored before. It’s mind-boggling what the future may hold within his mind. Amazing, fresh and enticing, Between The Lines cuts to the core of Robbie Laws’ musical adeptness with expressive and memorable musicianship.